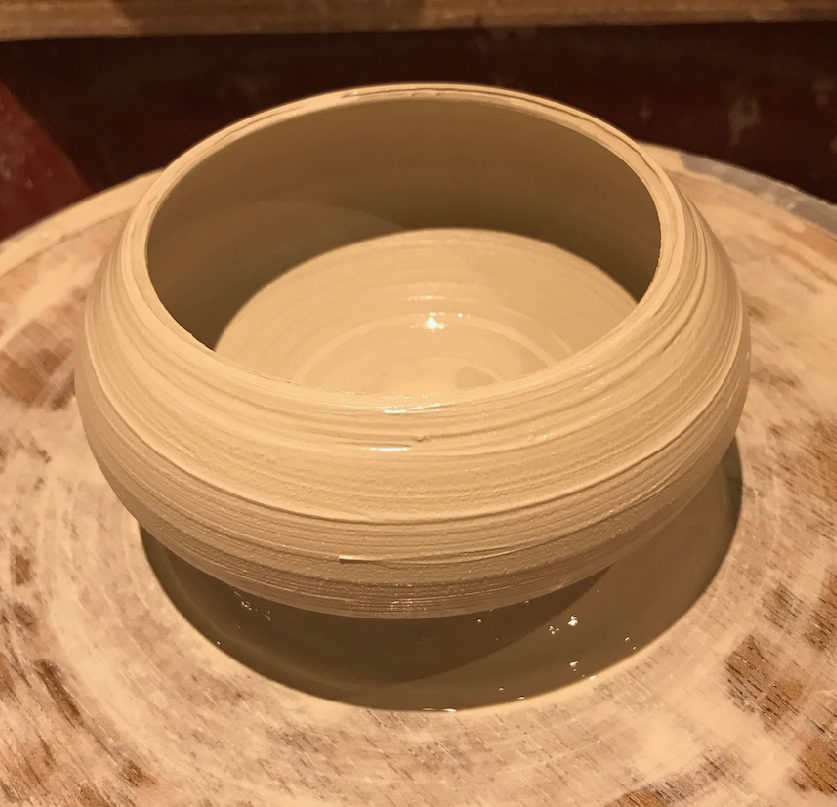 Today I threw my first plate and I am well chuffed. I did the old ‘push it too far’ thing and the rim collapsed but I do get what I did wrong and I will make it right in future iterations. I am intending to try and reflect the slip patterns in the Donyatt/South Somerset slipware traditions. I have included the pots from the collection below and you can see the sort of thing I am aiming for. Nice and simple with drippy bits.

I was meant to try and make slip today but had an anti histamine tablet and fell asleep! What a knockout drop that was. No need for me to get sleeping pills! I rose at 4pm still feeling as though I was on a ship in the ocean. You have to laugh.

I was told the other day about ‘Outsider Art’. I felt it was a bit like being in the reject group I was in at university. This group was self named as we didn’t feel that we were part of the cool set or the academic set and this group was intrinsically for all those who didn’t fit anywhere else. I liked that group until that too became a bit of a clique. Back to art – I have often felt that my work was not good enough, that I did not have the language to belong in the art world and that I was not quite a member of the artist club as I was not beautiful (strangely seems to be a ticket in) and/or had not been to college to study so had not won my right to call myself an artist.

I read up about ‘outsider art’ and felt I couldn’t quite be a part of that either as it seems to be for people who are identified by a different set of criteria.

“Outsider art is art by self-taught or naïve art makers. Typically, those labeled as outsider artists have little or no contact with the mainstreamart world or art institutions. In many cases, their work is discovered only after their deaths. Often, outsider art illustrates extreme mental states, unconventional ideas, or elaborate fantasy worlds.

The term outsider art was coined by art critic Roger Cardinal in 1972 as an English synonym for art brut (French: [aʁ bʁyt], “raw art” or “rough art”), a label created by French artist Jean Dubuffet to describe art created outside the boundaries of official culture; Dubuffet focused particularly on art by those on the outside of the established art scene, using as examples psychiatric hospital patients and children.[1][2]

Outsider art has emerged as a successful art marketing category; an annual Outsider Art Fair[3] has taken place in New York since 1993, and there are at least two regularly published journals dedicated to the subject. The term is sometimes misapplied as a catch-all marketing label for art created by people who are outside the mainstream “art world” or “art gallery system”, regardless of their circumstances or the content of their work.[4] A more specific term, “outsider music“, was later adapted for musicians.”

I have just learnt from doing, with my father or with people interested in sculpture and ceramics and my work is more a diary of my emotions and marks significant moments or feelings in my life. So, whilst in a sauna, my friend Cat and I coined the term ‘OutciderArt’. This group is for anyone in the West Country who wants to join us and do something arty. You are all welcome and your art will be celebrated.

So the pot I threw today was a plate. I had tried successfully to throw one yesterday but I wanted to see if I was doing it correctly or could improve. I did. I learnt to throw a little thicker, how to use a tool to check depth, I also found out how to flatten a large plate so that you do not get the ‘s’ crack in the base, I used a kidney to flatten for the first time but also learnt that using a sponge or your finders are fine. My flattening out the clay across the bat was better too. So all in all a good day.

I love to watch women throw large lumps of clay on the wheel. It gives me confidence, as I am small, not strong and dad often said he didn’t think I would be able to do it with large amounts of clay. To see other women succeed gives me the confidence in my ability and the idea that anything is possible.

So my research today was on throwing a plate so that I could try out slip glazing.